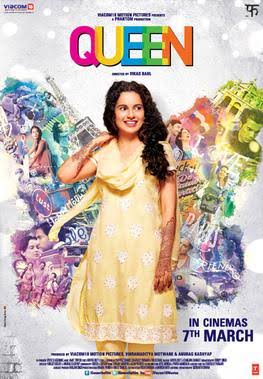 The story is about a girl Rani Mehra (Kangana Ranaut), who is a shy person who has virtually no confidence in herself. At the start of the movie, she is preparing herself to marry Vijay(Rajkummar Rao), the man of her dreams whose working in London. Vijay and Rani started dating while in college where Rani was learning Home Science and Vijay, engineering. Eventually he gets a job in London. After the marriage she had made all the preparations to go on her honeymoon to Paris and Amsterdam. But two days before the wedding, Vijay comes up and says that he does not want to marry her anymore as things have “changed” and she has’nt. She and her family, were distraught at first but in the end she decides to go on her honeymoon alone as it has always been her dream to go to these places. 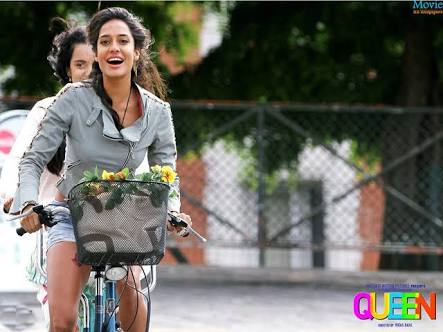 When she arrives in Paris she meets Vijaylekshmi (Lisa Haydon) who is half-Indian. Ironically enough she prefers to be called “Vijay”. They both get immediately acquainted. Rani is shocked at first to see that Vijay has a child with her boyfriend and that she drinks, smokes and sleeps with total strangers sometimes. Although apalled at first, Vijay gives her a new glimpse into life. Rani starts to think about the little things that her family, Vijay and the society have always said no for-even things like burping and how it seems to be totally normal to Vijay.

They both go clubbing together and Rani drinks and ends up telling Vijay all her problems. While trying out some new clothes fit to Vijay’s taste, Rani sends a picture to Vijay by which he is taken aback. From there, Rani travels to Amsterdam. 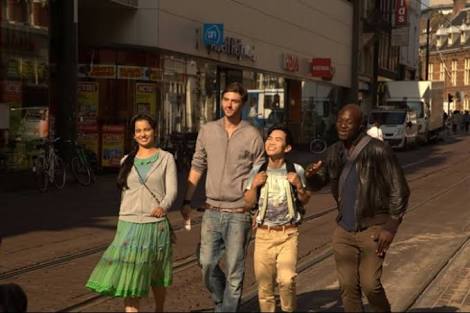 In Amsterdam she lives in a hostel with three other men-Tim from France, Oleksander from Russia and Taka from Japan. At first she is scared and shy to be around them but eventually she becomes close to them. Later she finds that Taha’s parents and home were destroyed in the tsunami in Japan and his friends brought him here to cheer him up. She visits Vijay’s friend Roxette to deliver a parcel. Roxette is a stripper in a club and her mother and sisters send her parcels to Vijay’s adfress so that her family does’nt find out what she is doing. When Rani asks if she can’t do something else, she just answers that the job has its benefits and anyway however you get it, Money is money.

While in Amsterdam she meets an Italian chef who she accidently insults when she says his food needs more spice and flavoring while he argues Italian food is like what he served. He makes an offer to Rani to come serve food in his restaurant at a boating dock. She comes and although she struggles at first, she manages to make gol-gappas and it becomes a big hit. Marcello then offers her half of the profits and they kiss, which happens to be her first.

When she comes back, she sees Vijay waiting for her after roaming Amsterdam for days. Now that she’s changed he tries to get her back, but an argument starts and Vijay gets into a fist fight with Olesander. She tells Vijay she will meet him tomorrow, after cancelling to go to a rock concert with her roommates. The next day he tries again to convince her but she gets up and leaves to join the rock concert with her friends. 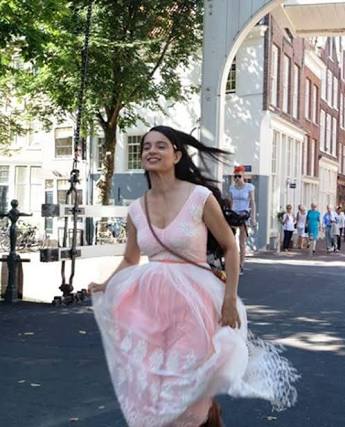 Later after she returns to Delhi, she goes to Vijay’s home,returns the engagement ring and goes home, a new woman.

This movie is really good. The very confidence it took her to go on her honeymoon alone is applaudable.And it was not in vain. She got to do a lot of things that she ought to have done before, rediscover herself, and come back a new woman. You could even say, Vijay actually did her a favour even if it did hurt in the beginning. The people she met on this journey were also very important to this story. On the outside they seem different from Rani and seems “wierd” but once she gets to know them , she realises that they are just like her. She even fits in perfectly with them despite that they are so different from her.

Kangana Ranaut’s performance is also applaudable. Paris and Amsterdam proved to be excellent choices for this movie as well. From where Rani comes from, good things can only happen to you if you are a good girl who always listens to her parents, her husband and anyone else worth mentioning. But in the end that did her no good and she ended up being a person who bends her decisions and choices to everyone elses favor and not herself. The comedic elememt in the movie was just enough to make it not seem forced. Like in a lot of movies, the female lead did not have her whole existence depend on the male lead. If there is one flaw that I could mention its that sometimes her foreign friends happened to answer her questions in Hindi which was wierd.

But apart from that, a great watch.