This film creeps us out on so many levels, but at the same time astounds us, leaving our jaws wide open as well. One of the most creepiest mind-boggling movies made so far, this film is a work of art on so many levels. I am giving a detailed plot summary below, because honestly without it, I cannot continue talking about the film. If you haven’t seen this film yet, stop reading this and go watch it! But if you want an overall review first, then scroll to the end of the plot summary mentioned in bold. 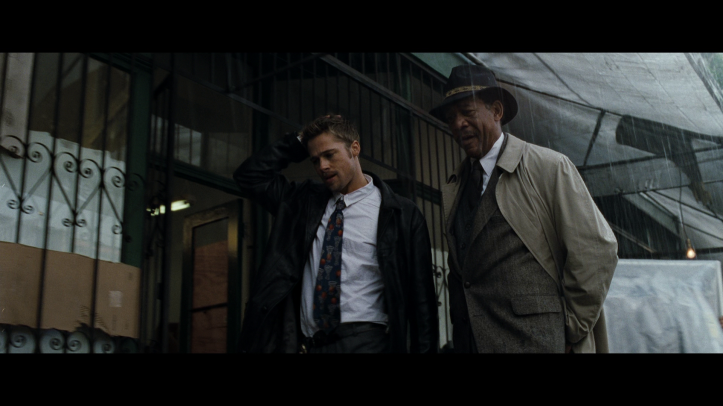 The film starts out in an unnamed city,  where we meet two police officers who seem poles apart. The first officer is William Somerset played by Morgan Freeman. Somerset is soon to retire from his post as a detective and he lives alone in his apartment in the city. The newly appointed detective in the city is, David Mills played by Brad Pitt, who has moved in with his wife Tracy.

Tracy is not that happy with them moving, but have to, for the sake of Mills’s job. After working together for some time, Mills introduces Somerset to his wife, who seems to understand the unhappiness that Tracy is feeling. Somerset then becomes a confidant for Tracy and she reveals to him later on that she is pregnant, but she is worried because she feels this depressing city is no place to rear a child. Somerset understands her, and we have a glimpse into his past, on the incidents that he shared with his girlfriend many years ago, that ended with him living alone to date. Somerset tells Tracy to tell Mills about the pregnancy only if she is going to keep the child.

Somerset and Mills starts on two homicide cases together. In the first case, they see a man who is obese who dies from a ruptured stomach after eating too much. Although they are confused as to how this could happen, the scene looks ominous with tins and tins of tomato sauce cans in the room. The men see the word “GLUTTONY” written on the crime scene and are left confused.

The second crime scene is at the office of a very influential lawyer who was killed by bloodletting. A pound of the lawyer’s flesh was removed and left on a pair of weighing scales with the words “GREED” written in his blood. Although confused at first, Somerset is convinced that they have a serial killer in their hands who seems to be punishing his victims according to the seven deadly sins. From there, Somerset goes to the library and starts researching through books like Dante’s “Inferno” , Milton’s “Paradise Lost” and Chaucer’s “Canterbury Tales”. Their theory of   a serial killer working in accordance with the seven deadly sins is confirmed when they find their next victims. The third victim was a known drug dealer and child molester, who had been strapped onto his bed in his apartment for over a year and tortured brutally by the serial killer. Over the bed of the victim, the words “SLOTH” are written through. They soon find that the lawyer who was killed before him had defended and saved the third victim in court, which is why both of them got punished.

Desperate to find the killer, they find a possible man called John Doe who has been checking out books from the library based on the seven deadly sins. They find the man, and a chase ensues with him cornered at gunpoint, but in the end, he escapes. Somerset and Mills finds John Doe’s apartment where they find hundreds of handwritten journals. All of them seem to indicate that the man is a psychopath intended to kill his victim according to seven deadly sins. From the information obtained in the apartment, they try to rescue the next victim but is too late. The next victim is a prostitute who was killed by a man, who was forced into wearing a bladed S & M Phallic device and raping and killing the woman. The woman died, and the man who was forced to wear the device is mentally traumatized. Over the door of the room they find the next sin “LUST” written on the door.

They get a lead on the next victim. But by the time they reach there, her face has been severely mutilated by the killer.  Apparently Doe had given her two options- Call for help and get her face mutilated or not call for help and choose suicide. She chose to suicide and over her bed the word “PRIDE” is written.

Mills and Somerset gets news that a man covered in blood has come to the office and they recognize him as John Doe. John Doe has apparently come after punishing his next two victims and he had continuously been peeling off the skin on his fingers to avoid identification. The blood of the victim is yet to be recognized. Doe asks Mills and Somerset to follow him to a location so that he can show them the last two victims.

At first, they do not agree to Doe’s conditions. But Doe with his attorney says that if Mills and Somerset do not abide by his conditions then he is going to plead insanity in court for which he could easily be let free. Somerset and Mills decides to follow him to the location that he wanted. 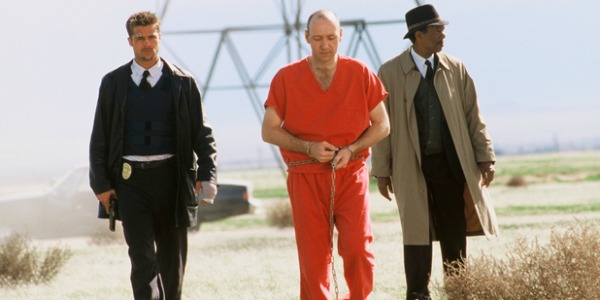 Doe leads them both to a deserted desert location. A delivery van appears and Somerset goes to intercept the driver while Mills holds Doe at gunpoint. Doe starts talking to Mills saying that he was envious of the life that he had with his wife Tracy and starts antagonizing him. Somerset is horrified as he opens the package to see Tracy’s head within it. Somerset warns Mills not to listen to Doe, but Mills hearing what he said frantically asks him what is in the box. Doe continues talking to Mills saying that because of his Envy he killed Tracy, thus completing the sixth deadly sin- ENVY. Mills is horrified but Somerset tries to keep the situation under control.  Doe goes further by telling him that Tracy was pregnant. Mills loses it and shoots Doe six times and kills him, thus attaining the seventh sin-WRATH. The police come and take Mills away saying that they will take care of him and asks where Somerset will be. He replies saying that he will be around.

This film surely sticks firmly onto the whole creepy neo-noir theme. To start off reviewing this film is a difficult task. But if asked where to start, Somerset would be a good option. Everything around Somerset and what he does seems to exemplify the fact that he is indeed alone. The start of the film shows him about his daily routine. The fact the Somerset needs a metronome to sleep itself shows us that he is very much alone and has been like that for many years. In fact I strongly believe that Somerset was one of Morgan Freeman’s best roles. Mills on the other hand was an entire opposite to Somerset. This antagonistic relationship between the two was definitely one of the main highlights of the film. And it worked out very well as they went through the case.

The concept of the seven deadly sins was also a firm factor in this film. It also managed to shock us and confuse as well. We all knew John Doe was intent on completing all the seven parts of the sin. The first five sins were a series of murders done in accordance with the sins. But when John Doe comes to the police station and surrenders himself we are left confused, and wary as to how he will complete his mission now. In a typical crime-thriller movie, we would see the villain being caught and handed over towards the end of the film, but Doe’s appearance was well before the end of the movie. But in the end John Doe managed to shock us all. Not only did he manage to finish covering all the seven sins, he managed to escape any other kind of punishment, but took death, which was his own choice.

I do feel pity for Mills and Tracy. They were not happy coming into this city. They did not even get to share the happiness of her becoming pregnant either, what with Tracy being confused whether to tell Mills or not. But in the end, everything was in vain, as Doe caught up with their lives and left it shattered.  I would definitely say without a doubt that John Doe is one of the most heinous villains I have ever seen. In a more traditional way of a crime-thriller, something that the villain does will have a mistake, something will go wrong and the lead of the film will find it, and use it against the villain to bring his crimes to an end. One thing that i liked about seven was, despite being the psychopath that he is, his crimes were well planned ,executed and the detectives or police were not able to come anywhere close to stopping him getting what he wanted. That makes this film stand apart from the other kinds of crime thrillers.

Oh, and a point of note for the faint hearted. The film is creepy. And scary. But its amazing. Its worth gritting your teeth and watching.