There was a time when I wanted to restart my anime watching. Especially anime movies. I asked a lot of people around me, who love anime, and they all suggested to me, to start off with this one. Although I was a little late, I eventually did watch it and regretted not watching it sooner! So here’s my take on this movie!

The story has two protagonists, one is Mitsuha. She lives in a small town called Itomori which is located in a mountainous region in Japan. Her life in the countryside doesn’t hold anything special for her. Her mother passed away, when she and her sister were young. Their family are strict in following traditional customs meant for the guardian God in the mountains. Her father decided to participate in political activities and hence their grandmother raised Mitsuha and her sister. She is bored and just wants to be born as a kid in Tokyo away from all this.

The other character is Taki. Just like how Mitsuha dreams about, he lives in Tokyo and studies there. He works part-time and leads and busy life. He also happens to have a crush on one of the people working at the restaurant with him.

Things are seemingly normal for both of them, until- 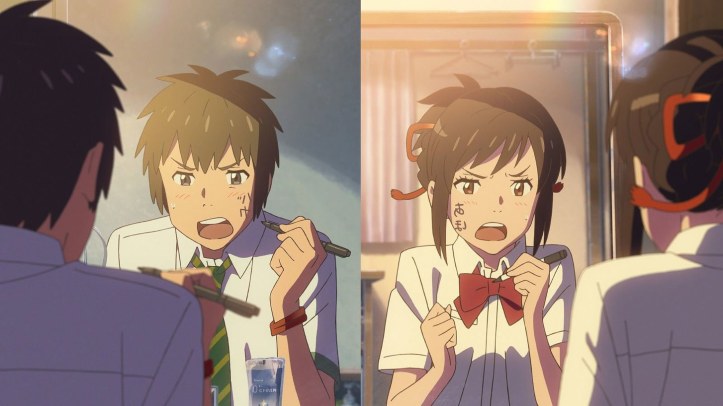 They realize that they have started switching bodies for no apparent reason.it is immensely troubling for both of them and initially they both cause trouble for each other. But slowly by writing notes to each other and noting things down on the phone, they start to help each other. 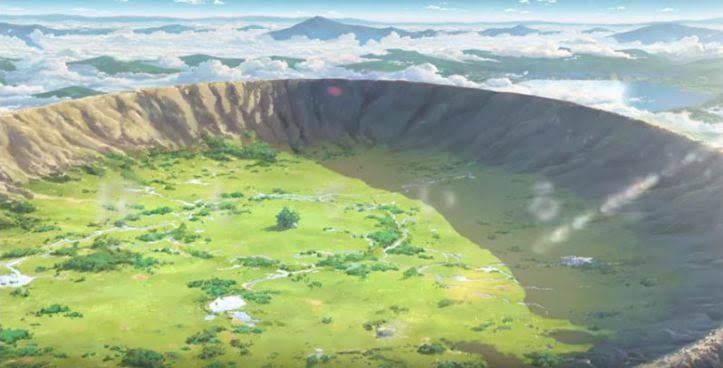 One day Taki, in Mitsuha’s body, visits the shrine of the guardian God and leaves behind a ritual alcohol made by Mitsuha. That night, the last entry given by Mitsuha is about a comet that will be visible from her village of Itomori. The next day, Taki notices that they are not exchanging bodies. He is unable to contact Mitsuha, and her diary entries seem to be disappearing from his phone, as if she never existed. He sets out to find Mitsuha and to find out what’s going on. But that journey turns out to be way more immense, exciting and impactful than he ever imagined.

Now this movie, was an immsense success. It’s one of the most successful ones in fact, and there’s no wondering why. A gazillion people way better than me have put to words, audio and video reviews on this film. But still why am I doing it? This is one of my top favorite films, and I just can’t not mention it on my blog can I? Hence I decided to write about it.

Now when you read through the film, just barely there doesn’t seem to be anything special about it right? That was my same thought when I first read the geist of the story. I thought this was the run-of-the-mill body exchange, fall in love, happily ever after kind of thing. And towards the middle of the movie, I could say the story and it’s flow indicated the same.

But after the middle portion , the story literally flipped over and I just got taken aback for a second and then I was fully concentrating and watching it. The plot was weaved seamlessly through, it executed even more smoothly on screen, and there lies the reason for the immense success of this film.

What made it more interesting was how Mitsuha’s character development and back story weaved into the story to make it even more exciting. Taki and Mitsuha really fought against all the odds and made it. Whether it be the body switching, the comet or the beautiful town of Itmori, it was really good.

The music was also well paced and suited the style and flow of the movie as it played out on screen. The animation work behind this was spot on. I had a hard time believing it was animation and that it was not real.

Japanese anime has always been at the forefront of bringing in unique styles and stories. It has redefined animation as not just cartoons for kids but something that adukts can enjoy. Movies and series like ‘Your Name’ really keep this alive in anime. And boy was I glad to restart my anime binge watching with this!

I highly recommend this!

For any queries please feel free to contact me at dowhatyoulove781@gmail.com or tweet or DM me @DoWhatYouLove96