The Indian Kaleidoscope : Baahubali – A mammoth in Indian cinema.

As far as Indian movies go, there are so many popular ones. Movies are made across many languages yet some end up being immensely popular not just in the country but around the world too. A new movie or rather a new “cinematic universe” that gained A LOT of popularity recently would be Baahubali. And you might not have watched it, but maybe you’ve heard it. Now if you haven’t heard about it, just one search on Google can give you an idea about it’s mammoth scale.

The word Baahubali, basically means “The One with the strong arms”.

The movie was divided into two parts due to its length. I will be including info on both the movies in this post.

Language : Made in Telugu and Tamil, Dubbed in Hindi and Malayalam

The movie starts in the ancient kingdom of Maahishmati. A woman, is being chased by some men with arms. She kills the men, but eventually starts drowning in the river at the bottom a huge waterfall. Upto her last breath she holds up the baby she is protecting. Some villagers who live near the river seeing this, saves the baby, but is unable to save the lady who then dies. The baby is adopted by the chief of the villagers and his wife and is named Shivudu. They close the cave through which the lady came and the couple takes care of the baby as their own.

Shivudu then grows up to be an energetic young man. His curiosity is always as to what is at the top of the waterfall which his parents try to discourage as much as they can. From the initial scenes introducing the adult Shivudu, it is evident that he is a very strong and able man.

One day a mask falls down from the top of the waterfall, and Shivudu curious as to find it’s owner, climbs up the waterfall in an epic song sequence – Dhivara.

Once at the top of the waterfall he finds Avanthika. Initially Avanthika is hostile towards Shivudu. But eventually they fall in love. However, Avanthika belongs to a clan of people who have sworn their lives to save their Queen, Devasena who has been in captivity under the evil king Bhallaldeva for more than 20 years. She leaves Shivudu and tries to go, but is captured by some guards, only to be saved by Shivudu.

Shivudu then takes on her mission to save Devasena in Avanthikas place.

Back in the palace we see that King Bhallaldeva is a person whose as strong as Baahubali is . He is amidst the construction of a huge golden statue of his and teases and taunts Devasena, who is in his captivity.

The loyal palace guard Kattappa, who was once loyal to Devasena looks on as he is bound by the orders of his king, as he is a mere slave.

Throughout the movie we see the people of the country and Devasena gaining an energy as they hear the name “Baahubali”.

That night, Shivudu rescues Devasena and fights off Ballaldevas son, beheading him. Kattappa runs over to kill the man who captured Devasena under the Kings orders but as soon as he sees Shivudu’s face, he kneels before him, places Shivudu’s foot on his head and exclaims “Baahubali!”.

Confused as to what just happened,Kattappa tells Shivudu the story.

Long back, when the king died and his wife gave birth to a son and died in labour, Shivagami, the wife of the handicapped brother of the king, takes control of the throne and the kingdom. She takes care of both her own son (Bhallaldeva) and the late King’s son who she names Amarendra Baahubali as her own.

She teaches both sons the art of battle, politics and knowledge and is confused as to how to choose the next king,amongst the two.

Eventually the answer comes when the kingdom is about to be attacked by an army of savages called Kalakeya. Shivagami then proclaims that the son who brings the head of the leader of the Kalakeya will win the throne. Bhallaldeva aiming for the throne kills through even innocent citizens and gets the leaders head. Baahubali however saves the citizens first, and then only goes for the enemy leading to Shivagami announcing that Baahubali will become the next king.

When Shivudu asks Kattappa to meet this great king,he says that Baahubali is no more. Surprised at how such a great warrior was killed, Kattappa reveals that the king was stabbed from behind… By Kattappa . And the movie ends. 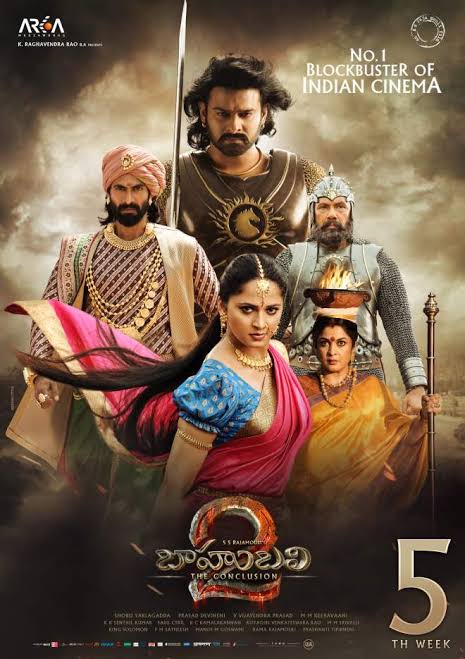 Language : Made in Telugu and Tamil, Dubbed in Hindi and Malayalam 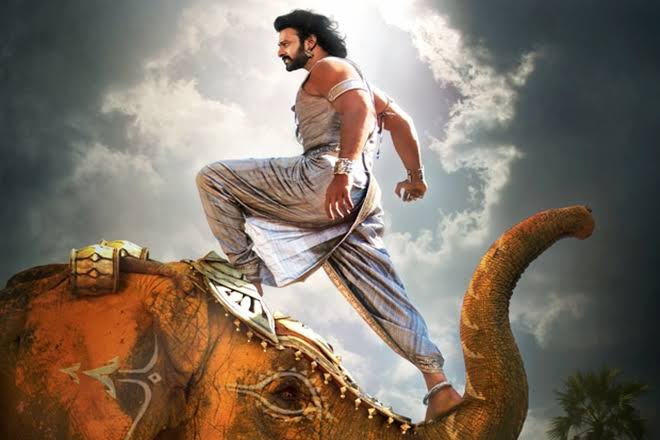 The story then continues from part 1, where after Baahubali becomes king. He is a just king, loved by all the citizens of his country. He then embarks on a mission to visit other countries under disguise with Kattappa.

During one of his ventures he meets the warrior princess Devasena with whom he subsequently falls in love.

Back in the kingdom, Ballaldeva is angry at his mother’s decision, and finds out about Baahubali falling in love with Devasena. He then plots a move by asking his mother Devasena’s hand in marriage. His mother sends the invitation to Devasena and her kingdom but it is sent more of as a favor to Devasena rather than a meaningful relationship to which Devasena insults and returns. Enraged at her behavior Shivagami orders the arrest of Devasena.

Unknown of this, Baahubali marries Devasena and takes her home to Maahishmati.

Enraged, Shivagami gives Baahubali two choices – the throne or his wife. Baahubali chooses his wife as he has sworn to protect and cherish her. Eventually Ballaldeva becomes king, but the support of the people remain with Baahubali, which displeases him.

In an incident where Devasena is detained for protecting herself from a man who tried to encroach her dignity, Baahubali beheads that man as he believes that is justice but ends up being sent out of the palace.

Devasena and Baahubali becomes one with the people. Eventually Ballaldeva plots Baahubalis murder and he is killed on the day, his son (Shivudu) is born .

Shivagami finally realizing the evil side of Ballaldeva proclaims the baby “Mahendra Baahubali” as king. He eventually tries to kill Shivagami and the child who however escapes as we saw in the beginning of the first movie. Devasena is detained and Kattappa ends his story.

The remainder of the movie depicts how Shivudu regains the kingdom and defeats Bhallaldeva.

Now it would seem like I mentioned like the whole story and that I served spoilers. But honestly I didn’t. The story is so intricated and so detailed that what I mentioned is just the geist of the movie. Although the story is within these two films as of now, the expanse and detail of these movies makes it seem more like a cinematic universe- what with the additional books and stories about the characters that are not popular.

Where does one start when they start taking about this movie? The plot is just amazing. Historical movies based on themes like this are not uncommon in India. But somehow Baahubali’s storyline with it’s fantasy, it’s setting and depth of characters, sets it a class apart.

There was a lot of preparation involved for the actors from preparing physically for appearances, battle skills and what not. And it was prevalent through the movie as well. The production on this movie is immense and it’s evident in the grandeur and detail in each and every scene in the movie. All the characters did their parts well but my favorite characters would definitely be Shivagami, the mother queen and Kattappa, the slave soldier torn between duty and justice. Their performances were exceptional.

Comparing movies 1 and 2, the one I liked better was definitely part 1. Part 1 was a huge beam onto the world of Maahishmati and it’s characters and there was so much to enjoy. Part 2, as its title suggests is more of a conclusion. I didn’t enjoy the comedic instances in the second part that much either.

From the insane production and efforts into this movie it’s not a surprise as to why it was a commercial success not just in India, but across the world. You can see a little bit of that in the song Maahishmati Anthem.

Another thing is the music. Be it the track Dhivara that I mentioned before or tracks like Kaun Hai Wo.

If there were any points of criticism it would be mostly across part 2. The last war and it’s associated stunts were a little too good to be true, even for a Baahubali movie. And like I mentioned before the comedic scenes as Kattappa and Baahubali travelled just felt out of place. I honestly don’t know what they were attempting by that point though. Although Avanthika was given so much hype eventually she just became a love interest to the male lead, who took over the story. It wasn’t entirely a male controlled story thanks to the presence of Shivagami and her performance.

Overall, it’s one entertaining movie and one that you will definitely enjoy! I highly recommend!

If you’ve watched this movie, let me know in the comments below!