Hello everyone and welcome to my first blog festa! The festa is basically a set of posts that are released based on a single theme. It’s an idea I planned when I reached my blog’s second anniversary. I wanted to start it with something special, so I decided to do it on FRIENDS! And what better time to do it than now, when we have just crossed 25 years since the airing of this episode! In each post I’m going to cover my favorite moments in the season the post is based on! So without any more delays on my blabbering!

Chandler found out there was something seriously wrong with Joey’s tailor – the hard way.

Can we really forget this one?

Phoebe and Ross’s debate on evolution.

Ross: You don’t believe in evolution?

Phoebe: I don’t know, it’s just, you know…monkeys, Darwin, you know, it’s a, it’s a nice story, I just think it’s a little too easy.

Ross: Too easy? Too…The process of every living thing on this planet evolving over millions of years from single-celled organisms, is-is too easy?

Phoebe: Ok, don’t get me started on gravity.

Ross: You uh, you don’t believe in gravity?

Phoebe: Well, it’s not so much that you know, like I don’t believe in it, you know, it’s just…I don’t know, lately I get the feeling that I’m not so much being pulled down as I am being pushed.

As serious as the problems on money were between friends it was hilarious as well! Especially when they were choosing the food!

Chandler and Joey – the baby sitters

It was just to see these babysit Ben while they use the baby as an excuse to talk to pretty women as well.

But what was even funnier was them not losing Ben on a bus, but having difficulty recognising him amongst the babies!

Ross Finds out over drunk voicemail.

That moment is finally here- Ross finally finds out about Rachel’s feelings for him over a drunk voice message she left him! 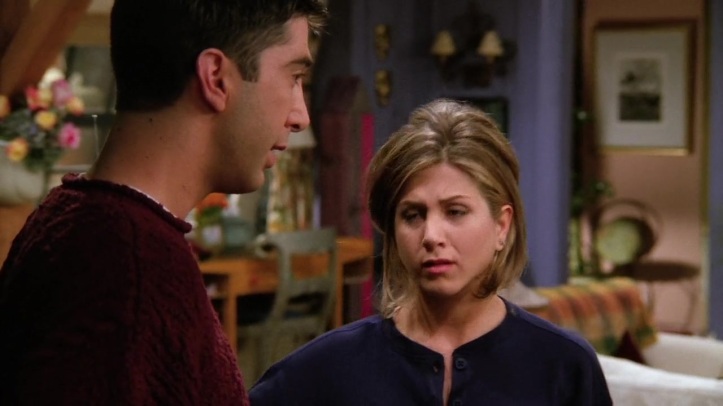 Chandler and Monica as exercise buddies

Chandler makes the mistake of asking Monica to be his exercise buddy. Which turns out to be a bad idea as she rushes to wake him up early on a Sunday as well! 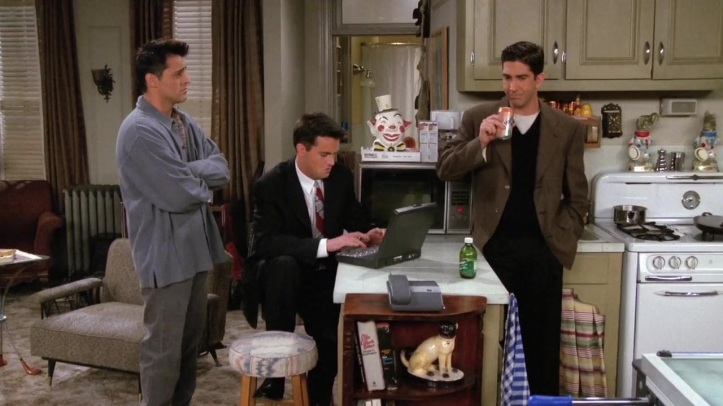 CHAN: All right, check out this bad boy. 12 megabytes of ram. 500 megabyte hard drive. Built-in spreadsheet capabilities and a modem that transmits at over 28,000 b.p.s.

PHOE: Wow. What are you gonna use it for?

As mean as this was, this was crazy funny too. Especially when the printer had to start printing at the exact moment Rachel came!

ROSS: Ok, just, just remember how crazy I am about you, ok?

RACH: Kind of ditzy? Too into her looks? Spoiled?

ROSS: Now that’s a little spoiled. He was supposed to type “little”, the idiot.

RACH: Oh! I do not have chubby ankles!

[Rachel leaves, and Ross follows her into the hall.]

RACH: She is not Rachem. What the hell’s a Rachem? Is that some stupid paleontology word that I wouldn’t know because I’m just a waitress.

[She goes into her apartment and slams the door.]

Now can we ever forget Russ? 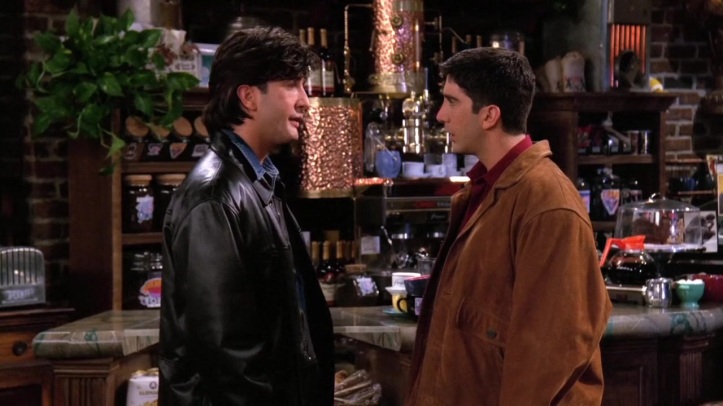 Carol and Susan get married

Carol and Susan get married and Ross walks Carol down the aisle. The ghost that had possessed Phoebe decides to leave after witnessing the wedding as she has now seen it all!

Chandler gets trapped as part of revenge

Chandler’s old school friend Susie traps him naked in the washroom after what he did to her when she was young. Special note this character was a guest appearance by Julia Roberts! 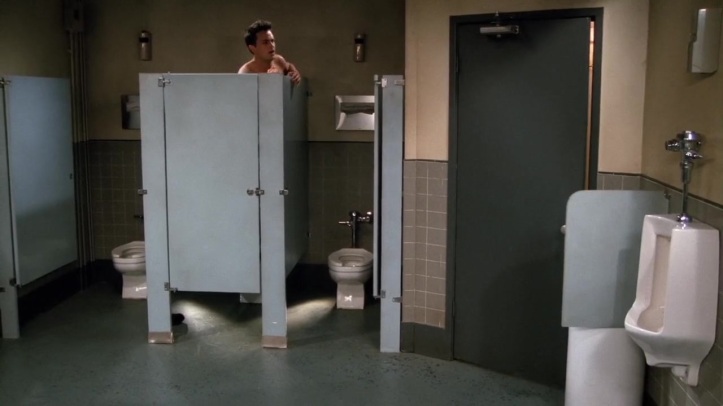 The sweater or the bag?

Monica and Rachel fight over a guy by ruining their favorite bag and sweater which Phoebe finally stops!

This is literally my favorite episode despite the seasons! 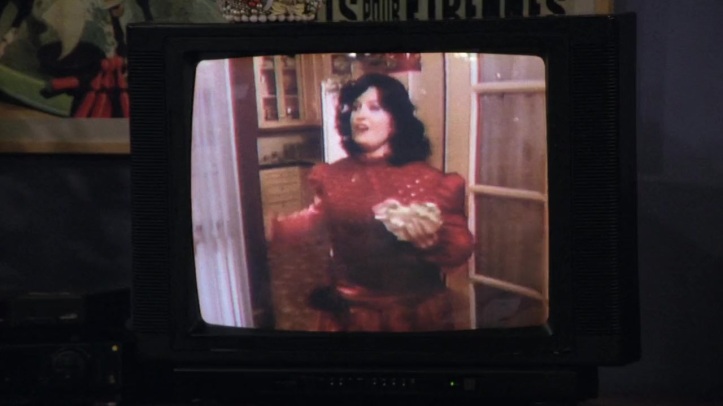 Whether it was then trying to figure out how many cameras are on Monica as she claims the camera adds ten pounds. 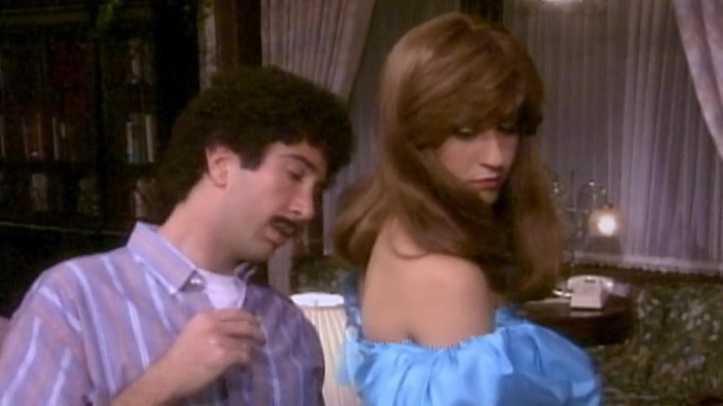 Or Ross who actually was going to take Rachel to prom only to be left alone. Okay as I’m typing this I’m just going to pause here to watch this episode and come back! Alright I’m back!

This episode is literally the sweetest!

Chandler struggles to keep a gold friendship bracelet that Joey gets for him and tries not to hurt his feelings.

Another constant furniture feature on the set – the recliners that Joey buys with his new found money also arrives at this season!

Enter one of the most important characters in Monica’s life – his dad’s friend and now her love interest, the ophthalmologist – Dr. Burke.

Can we really forget their attempts at their first date? Especially the early man section. 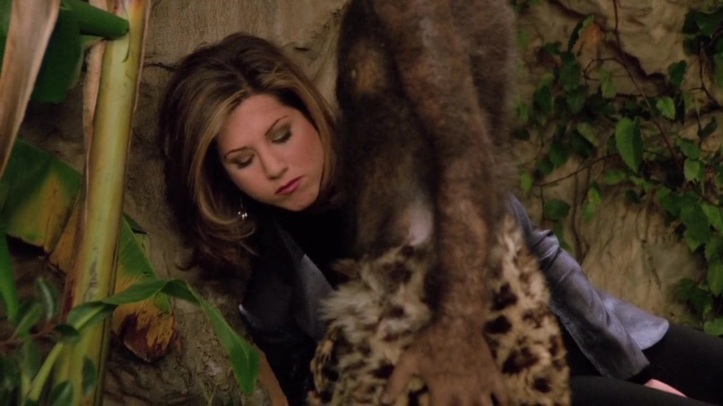 Sad as it is, Joey Moves out after an argument, cue entry of Chandler’s new crazy roommate – Eddie.

Smelly cat gets an actual music production as a producer feels it’s a hit! “Smelly cat! smelly cat! What are they feeding you?”

Joey’s character is pulled out of the show as he dies after falling down an elevator shaft and Joey finds himself in a fix..

More comedic scenes as we see Rachel and Monica both balance their relationships! 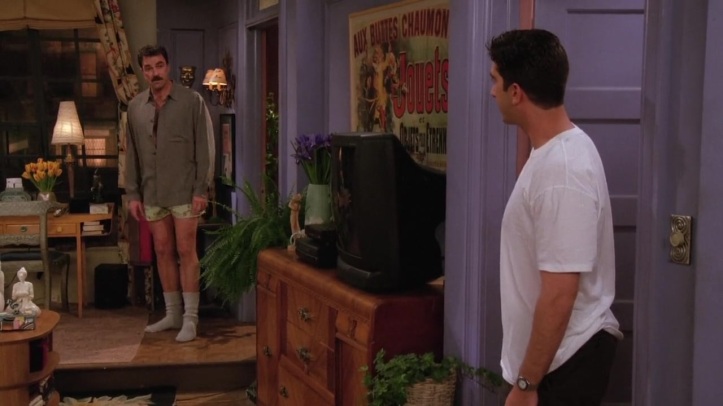 She tries to find her real father after she realizes the pictures her grandmother showed her was of a picture frame model. She doesnt meet her dad, but she does meet her half brother. 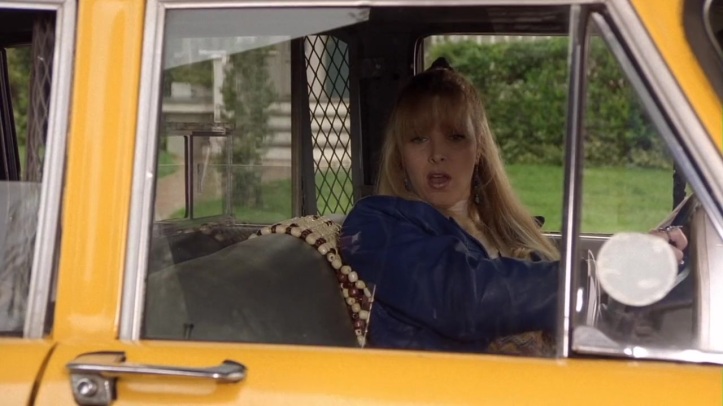 They are sadly forced to conduct two birthday parties for Rachel in both the apartments as both her mother and father are coming and they don’t really meet eyes. Ross also has some awkward moments with Rachel’s dad as well.

Phoebe comes down with chickenpox just when her boyfriend from the Navy visits. But will that stop the two of them to be together? No way.

It’s pretty evident at this point that Monica has an OCD over a lot of things but it’s shocking to her that Richard doesn’t have little quirks like her!

Can we really ever forget the fashion disaster that Rachel had to go through as the maid of honor?

Monica and Richard break up.

Understanding that the two of them do not have the same idea on the future of their relationship, Monica brings it to an end.